Avid quail hunters from Oklahoma’s Texas and Beaver Counties have formed the newest Quail Forever chapter in the state. Named the Homesteader Quail Forever chapter - honoring one of the last areas in Oklahoma to be homesteaded - the group will work to improve upland habitat for bobwhite and scaled quail in the Oklahoma Panhandle. 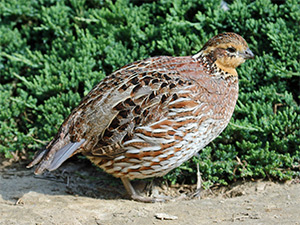 The Bob White Quail, South West Indiana’s indigenous quail species, is the most pursued upland game bird in Indiana. Hunters, bird watchers, and naturalists alike all enjoy the sight and sound of the Bob White quail.

Although the Bob White appears to be a drab looking bird, upon closer inspection many colors, and combinations of those colors can be scene. Cocks, the male birds, have white throats, chins, and stripes, while on hens, the female bird, these parts are buff or beige. Breast feathers include black chevrons, and upper parts include hues of yellow and black shading on top of light browns. The Bob White quail can achieve near invisibility by standing still in light backgrounds. They weight from 6 to 8 ounces and are about ten inches long. 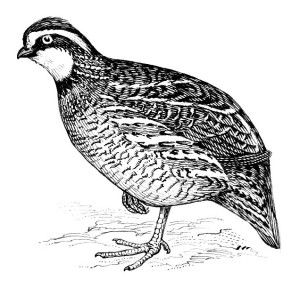 Bob Whites only eat seed, fruit, and insects from the ground, thus their diets change often from season to season. The Indiana birds subsist on the waste grain of common Indiana crops like corn and soybeans. They also subsist on grain seeds like wheat, or vine fruit that has fallen to the ground.A family group of quail is called a covey, which consists of one mail, and one female. The female lays between 12 and 18 eggs which incubate for 24 days. After the eggs are hatched, the male assists the female in raising, feeding, and protecting the young. They covey lives together until the next spring, when they separate to go mate.

The best quail habitats are found in South West, and South East Indiana. These regions are ideal for their climate, and because they are not over farmed or over timbered. Quail use fence rows and waterways as travel paths, and thrive better in clearing-like areas, not wooded ones. 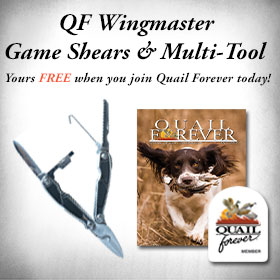